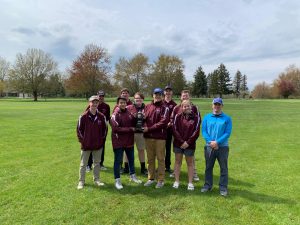 The morning scramble matches saw the Panthers take an early 2 1/2 to 1 1/2 lead.  Aaron Leoni and AJ Klein led the way with a thrilling victory that came down to the final hole.  Leoni hit his 100 yard approach shot to 5 feet setting up the win.  Also worth noting was the team of Riley McKinney and Thomas Morgan who fought hard to tie their match and earn a 1/2 point.

Coloma fought back in the afternoon Greensomes matches, but was only able to go 2-2.  This left the Red Arrow Cup once again in the hands of the Panthers with a 4 1/2 – 3 1/2 victory.  Parker Lawson and Noah Weber were the stars of the afternoon match as they defeated a team that included Coloma’s top golfer.

On the day 6 of the 8 Watervliet golfers helped contribute at least a 1/2 point to the victory.

No Events This Week

Events are added by athletic staff.
View All Events